How do we get out of the matrix?

If human beings are just constructed simulations inside something else's computer, where's the escape hatch?

Picture: It's all a bit of a puzzle. Who are we really? The Simulation Argument. 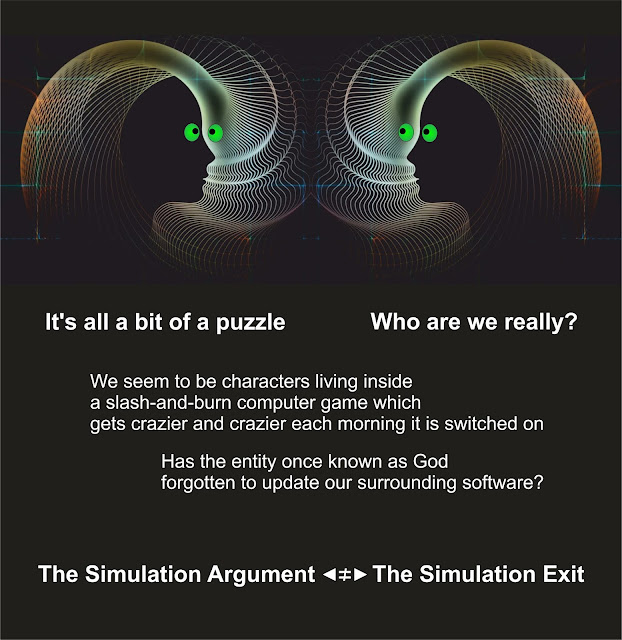 If you think like this, you probably also think that you are living in a base reality. Look around you. You seem to live in a real place which actually exists in physical reality and occupies a demonstrable physical location which can be visited by others, looked at through binoculars and trodden underfoot, sometimes with a crunchy noise.

Other people live in this base reality with you. Some of these you think of as human people. You can see them and hear their vehicle noise and catch diseases from them. If you want to, you can communicate with them without using any device other than your vocal cords. A physical mixture of gases around you carries sound waves which makes this possible.

These gases include nitrogen, oxygen, carbon dioxide, water vapour, argon, xenon, neon and krypton. Each of these gases can be isolated from all the others. Any one of them can be put in a container on its own, in solid, liquid or gaseous form. That container can then be plonked down in front of you next to your device. You notice that the container is there. A little while ago you also noticed that it wasn't there (yet).

We live in a most convincing base reality. It's actually there. We actually experience it ourselves.

Most Westerners thought like this until 1999. Then they went to see a film called The Matrix. This got some of them them thinking in a different way.

Then, in 2001, Nick Bostrom of Oxford University (UK) privately circulated the first draft of a paper. It asked a question: Do we live in a simulation?

Philosophical Quarterly is not like a Rupert annual. And Nick Bostrum is not like the man behind you in the fish shop. He is a Swedish-born philosopher with an academic background in theoretical physics, computational neuroscience, logic and artificial intelligence. If he walks up to you in the back bar of the Bear with an empty pint glass and half a packet of pork scratchings in his hand, you need to get out fast.

But what about Bostrom's question? Do we live in a simulation? In other words, rather than living in a physical base reality, could we, and all that we experience as physical, actually be constructed simulations created inside somebody else's computer?

Such a simulation would take a very big computer and someone who was very good indeed at writing creative computer code.

Whose computer might it be? One possibility is that it belongs to the entity once known as God.

And where might the big computer be kept? Perhaps it is kept everywhere. The totality of what we think of as the physical universe might actually be a huge quantum computer.

And what might we call the clever bunch of computer code which produces the simulacrum in which we live and move and have our being? One possibilty is that we call it AI (the All-Seeing I), 'artificial intelligence'.

So then, what is the likelihood? Are we virtual beings living in a simulation or not? It depends who you believe. According to the academic specialists working on the thoughtflows which followed the original publication of The Simulation Argument, things have changed since 2003. These days the chances are reckoned to be about fifty-fifty. That is to say it is as likely as not that we are virtual beings living in a simulacrum.

This leaves a final question. If, one day, looking around inside our simulated existence we happen to find evidence of it being a simulation - we notice a fundamental glitch in the fabric of the illusion - something really crazy and mad - or something getting crazier and madder and more unbelievable each time we look - how the hell do we get out of the simulation before it's too late?

That's easy. We just go to sleep and choose not to wake up again. We return to where we belong and to where we are actually real and always have been. Our time in the mystery school on Planet Earth will be over.

Alternatively, we go to sleep and wake up somewhere else. But there's another option. We get it, choose to wake up inside the simulation again and put the news around.

If we do this, and the AI notices, which it certainly would do if it is the All-Seeing I, would the AI then (1) Delete us? (2) Limit the visibility of our influence inside the simulation? Or, (3) Have a good laugh and invite us to join it in creating something new, something more and something better?

More theoretical background here. Reviews of the 1999 film, The Matrix, can be found here, here and here. The full text of The Simulation Argument is linked from this page here. And there is more about NIck Bostrom here.

Late note: There's another perspective. We commented above about the possibility that if we are actually characters living inside someone else's computer-generated simulation, one day one or several of us might notice 'concrete' evidence of this fact. Looking round inside our simulated existence on a wet Tuesday morning in November, say, we suddenly notice a fundamental glitch in the fabric of the illusion in which we are immersed. It might be something totally mad-looking; something absolutely ridiculous, impossible and unique which doesn't at all fit with our established understanding of the world we perceive ourselves to be living in. What then?

We might just call the glitch-event supernatural. Perhaps it's a miracle. If the glitch in the fabric of the simulacrum repeats itself, we might start thinking of it in terms of a revelation about the existence of other powers, other realities, other worlds. If the mad-looking stuff continues episodically, and enough people see it or hear about it, the anomalies might be turned into the bases of a religion. They could be collected, recorded in writing, discussed, argued about, and condensed into scriptures. What might happen then can only be imagined.

Can heart pacemakers be used as assassination devices?

Life is a dream.